In September of 1897 the Athens Board held a special called meeting to discuss the possibility of electric lights in Athens. Consulting engineer, Mr. J.L. Ludlow estimated that the light plant could be built for less than $5000 and by December of that same year materials began to arrive in Athens. This was the beginning of Athens Light and Water Company now known as Athens Utilities.

In early 1906 the first office of Athens Light and Water Company was completed at the corner of Beaty and Market Streets. The meter system for lights was installed and a water tank built to provide Athens with water.

1908 saw the installation of Athens first street lights. A short seven years later Athens city council passed a resolution to either sell or lease the light and water plant, but the resolution met with great opposition because the city had spent thousands of dollars and recently purchased 300 meters.

Two years later in 1913 the city council again voted down a bid by Alabama Power Company to purchase the light plant for $12,000. Athens Light continued to produce electric power for the city until midnight May 31, 1934 when Athens became the first city in Alabama to receive power from the Tennessee Valley Authority (TVA) a partnership that remains sound and secure today. This 79 year old partnership allows Athens Utilities to purchase power from TVA and distribute it to their customers. In 1911, when the city council refused the bid to sell Athens Light Company to Alabama Power Company, they maintained the right of the city to govern Athens Utilities as a non-profit public power company. 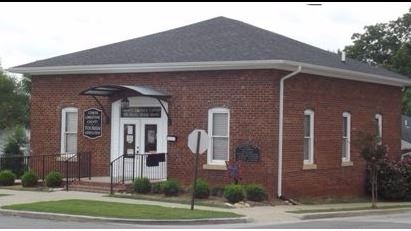 The Athens Light and Water Company building as it appears today. Renovated in 2009, the building now serves as the office for Athens-Limestone Tourism.

For updates on major outages/utility disruptions, please sign up for Nixle alerts by going online at www.nixle.com.